​Buy the hardback or

Released from a Union prisoner of war camp, Confederate Civil War veteran Lieutenant Henry Gates returns to Buzzard Roost, Alabama, shocked to find his family’s plantation burned to the ground. Lonely decades slip away as Hank searches for his wife and children before finally settling in Southern California.
The year is 1888, and San Diego’s real estate boom is gasping its last few breaths. Those hardy souls still remaining eke out an existence by any means possible. During the day, Hank buys land and mines copper. After midnight, haunted by ghosts from a violent past, he roams the godforsaken alleyways of the Stingaree, seeking solace, hoping for redemption.
On one of these dangerous forays, Hank witnesses the savage execution of a fellow Allerbammer Yellowhammer. Who is the insolent man that waves farewell after committing such a remorseless act? Given their contrasting histories, will they become friends?
Lieutenant Gates attempts to build a new life upon a shaky foundation. The riddle of his missing family unravels when he joins a public service organization headed by a mysterious photographer. With the aid of a growing circle of loyal allies, Hank discovers more than he ever bargained for. Is it possible for a Spiritualist to speak with loved ones who have passed beyond the veil? In the end, can Hank live with the horrible truth? 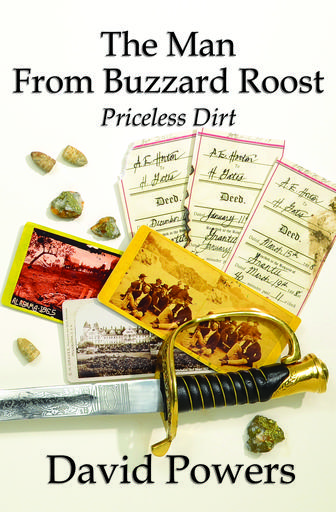 book: The Man From Buzzard Roost.

"The wind snuck through the seams of my wool coat as I hooked the sword onto my belt. On most nights, to keep the repetitive nightmares treed, I roamed “Sailor Town,” more widely known as the “Stingaree.” Although treacherous, this nocturnal routine triumphed as much healthier than the countless years I threw away drinking myself into a stupor."

The Man From Buzzard Roost